A study of the proliferation of buildings in the Palmer Street and Railway Precincts Townsville, Far North Queensland Australia.

Townsville is a regional city in Far North Queensland, Australia. It  is often described by Queenslanders as ‘the capital of the north’, and enjoys a mult- sector economy which includes, government, defence, tertiary education, resources and tourism, together with one of the major ports in Australia.

In 2003 to 2007 two cityscape precincts in Townsville were subject to intense development stimulation. The Palmer St precinct on one hand was transformed into an active eat street and hotel precinct, whilst the Railway Precinct saw patchy development in the same period, although both precincts were the subject of city visions and stimulus by local authorities. 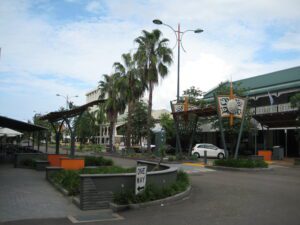 In this case study, the ensuing phenomenon of ‘prolific building growth’ in these dilapidated cityscapes is explored and explained, by what is proposed as the central force of change – ‘the property development mechanism’.

An explanatory model of the ‘property development mechanism’ is created in the setting of dilapidated cityscapes which are seen as a ‘field of activation’ for the mechanism and its actor ‘the property developer’. The reasons for the different levels of activation are explored, and the findings both support and strengthen the model, and form a basis for future exploration and development of the model.

To read about the project in more detail please see Jon’s research page “The Seed in the Cityscape”.