The Outer West of Sydney: Beyond the economic lens

In a recent city focused  workshop (2015) , a key speaker illustrated the changing face of Sydney and other cities around the world through a mind spinning array of charts and graphs inter-spaced with topical strategic maps of the Sydney Metro. The presentation included the emergent ‘geo-spatial’ view of the city and other techniques, grounded in the grinding national statistics of  economy and demography.

These after all are the foundation statistics of our nation at a macro level, the ABS, census, economic and industry data along with other industry data sets. The resultant analysis and charting of such data can however only ever be as good as the data itself. Whilst we still use the economic or demographic lens as our key visor for the viewing of the city, we will only see it in such terms.

The economic and demographic lens has allowed us to view the city from the stratosphere, through national statistics that were not originally designed to describe the phenomenological changes in the face of the city and its forces and drivers.

Meanwhile on the ground, the city moves like a slow giant, creeping every outward toward the frontier threatening to swallow the outer centres which are in its direct path. Such centers however are on their own historical timeline from their post rural era and form their own development path in proud emergence into their own new modern city.

The way in which these two phenomena, the slow giant and the regional centre in its wake, interact requires more understanding than a national statistic can provide. The new view of the city must combine the view from the stratosphere with a view from the ground.

The Plan for Growing Sydney 2014

In December 2014 the Department of Planning and Environment published a blueprint for growing Sydney which has been  brought to life using  maps of the various regions of Sydney, and how they interact and fit into an overall vision for the city. The map below (extracted from the plan) is one of the overarching visions for the city metro area from the ocean to the Blue Mountains. The city is also divided into a number of precincts and ‘spatial metaphors’ that rub shoulders, interact and compete for vital resources and infrastructure. 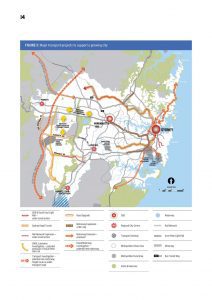 The Inner and Outer Ring

For the outer western stakeholders and their interests, the plan recognises centres like Penrith, its Health precinct (PHEP) and Campbelltown-Macarthur  as regional strategic city centres. The power that such centres have in influencing such a high profile strategic recognition has been illustrated for example in one of Penrith’s public advocacy documents for the March 2015 State Elections (pba-2015-advocacy-brochure). This is an example of the strength of advocacy in the outer western region and what can be called here the outer ring of  centres: Campbelltown-Macarthur, Camden, Penrith,  Richmond and Windsor. The inner ring of already mandated strategic centres includes Liverpool, Parramatta and Blacktown amongst others who are already absorbed somewhat by the earlier waves of the city’s march toward the mountains.

The competition for the ongoing allocation of resources and infrastructure, now is marked by the strong competitive forces between the inner and outer ring, which when combined,  form an amorphous region loosely called ‘The West of Sydney’.

Somewhere between these inner and outer rings lies a resultant divide. A dividing range if you like which moves west annually, measured by the occurrence of new road and rail infrastructures, and the constant march of the city suburban fabric. This fabric slowly engulfs the Sydney basin onward past Parramatta and on toward the Blue Mountains. It  fades in its definition however somewhere between the metro mid-city zone and Penrith on the boundary. This dividing line and its dynamic is worthy of further analysis as it provides a measure of the city’s growth and movement as time goes by, and which goes beyond more reductionist high level economic and demographic analysis.

The Waves of the City

it is one thing to measure progress in these inner and outer rings by economic and demographic analysis, which is a recognised foundation indicator for growth and change in each of the centres and surrounding suburbs. However in each of these centres, there are individual and local measures of their response to the overall stimulus of the state based metro initiatives and infrastructure. This is seen by the advent of what I would call ”’catalyst events’ which when they occur send market and social signals for further developments and ongoing catalysts. In some cases these catalysts occur slowly over historical periods and hardly go noticed as a significant measure of progress. Centres will complain that nothing seems to be happening, but the relentless forces of time and development are occurring in almost invisible layers in waves across the city lapping up to the edge of the Blue Mountains.

One such wave is what I call ‘The Cappucino Wave’ which is an indicator of  change from the previous Australian milk bar culture to cafe culture, a sub-marker of the overall force of gentrification. Another wave is what could be called the ‘anchor wave’ which occurs when regional shopping centres attract anchor tenants which in turn attract support retail offerings in a regional shopping centre which then subsumes the older street retail offerings and relegates them to a secondary status.