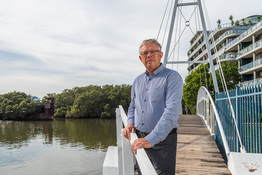 The policy engine rooms of infrastructure, employment, affordability and urban consolidation guide the growth of Sydney towards its burgeoning population centre; the outer west. However ‘wholesale city basin’ planning approaches guided by economic and demographic meta-data do less to understand the reluctance of the city’s outer west centres to respond proportionately to this stimulus especially in their dormant and semi-dormant city areas.

Dormant city areas and dead spots continue to haunt many of our burgeoning, high growth cities and the outer west centres do not escape the same phenomena. Former port lands, ‘brownfield’ sites and degraded suburban areas persist in these states for what appears to be decades without any apparent revival. Despite the usual forms of planning, zoning and controls, they appear to display obstinacy over large time periods that continue to confound local and state planning authorities and leaders.

This research draws on the existing doctoral study (Author 2014) of several dormant cityscapes across the Sydney Basin as well as two regional cities (Newcastle and Townsville) and their revival of dormant cityscapes, to bring a clearer understanding to the nature and dynamics of dormancy. The cityscapes are viewed through a time-lapse, mechanistic view by charting of stimulus events over several decades to identify the often invisible forces at work.

The models and analytical tools arising from this existing work will be applied to undertake a micro-study of three key outer western city centres: e.g. Penrith, Camden and Campbelltown. The results will provide further reinforcement of a Dormancy-Proliferation model for use as a foundation for future planning and policy decisions.

At city basin planning level the often urgent political reliance on lineal, visible change will be augmented and go beyond such ‘meta-views’ along with the predominant use of the economic/demographic lens to view our cities. Introduced, will be a view of not only artefactual indicators but the invisible markers of change. This, along with a mechanistic ‘time-lapse’ view is used as a means of enhancing our knowledge of dormancy periods.

A micro-study of dormant city areas and their potential to proliferate large scale property development projects and a resultant proliferation assessment model/matrix.

The study enhances our understanding of dormancy and the historical timelines that it operates under. In this way a revisionist view of this phenomenon informs planners and city leaders to understand dormancy and its revitalization, which goes beyond political urgencies and allows for revised planning perspectives

A concept paper relating to the research has been accepted for the State of Australian Cities Conference 2017 to be held in Adelaide in 28 to 30th, November 2017. The paper uses an analytical framework drawn from the research to date on Honeysuckle, Palmer St and other precincts and provides a discussion of the state of transition of Penrith’s central car park. It is intended that a similar analysis be done for the other outer west centres as part of the research moving forward. The article title is as follows:

See our web page for the concept paper.

The proceedings and outcomes of the initial workshop are covered in our workshop page for this research.