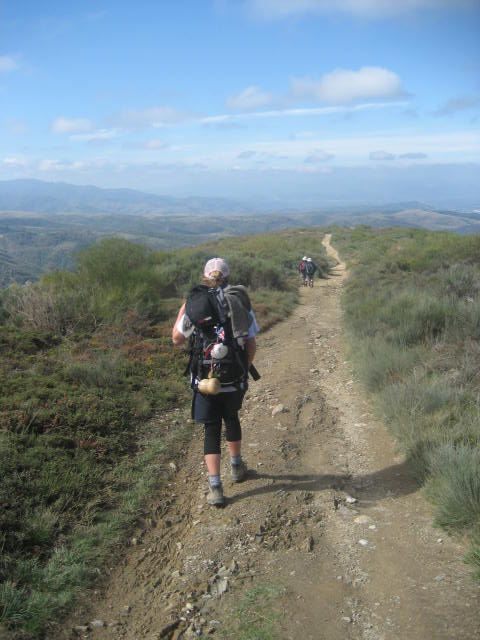 The Camino de Santiago- otherwise knows as the ‘Way of St James’ or ‘The Spanish Pilgrim’ trail winds its way through France over the Pyrenees into Pamplona, then across Spain to the Cathedral of Santiago de Compostella which lies close to the Atlantic ocean and Finisterre ( ‘the end of the earth’ at one time).

I walked this path in the European autumn of 2006 with my young family . To my three teenage kids it was a coming of age and as a family, a test of endurance and love. A book arose from the experience which I called ‘The Way of a Thousand Arrows’.

The ‘thousand arrows’ referred to the yellow arrow markers that lined the path for the hundreds of kilometres that pilgrims relied on to walk the path.

The standard ‘take away’ for my kids was ‘that they would always be pilgrims’ a note to their endurance and resilience rather than a religious missive.

There was only one other family on the Camino and they walked in a traditional manner with a donkey. We became friends with this other little family who also serenaded the Camino community at the ‘Albergues’ or communal accommodation which opens its doors to pilgrims from across the world, traditionally for a donation.

Since then over the many years that have passed my wife Penny and I keep being asked to do the author talk which we originally presented when the book was launched and received ‘The Messenger Marketing Award’ from the NSW Writer’s centre in 2007 at their annual book fair. We were also interviewed by ABC radio Port Macquarie by Michael Spooner in 2015 click here and presented to the local library.

Most recently we were thrilled to be asked to speak at a Probus Newport meeting held at the Newport Bowling Club. Thinking that there would be only a small gathering of Camino philes we were staggered to present to a full house of about 120 people who by all accounts had an average age of between 65 and 70 years old! (this was discussed openly on the day due to the intense nature of the Camino physically).

On the age note, I cast my mind back to our experience in 2006 and felt the average age of the walkers/pilgrims was about 45. However we did notice that there were some 60 and 70 year old pilgrims walking.

At the start of the Probus talk I asked how many people had walked the Camino and a handful responded, however nearly all the audience had heard of the Camino which is interesting because back in 2007 it was not so well known.

It is well known now, and also over many centuries, hundreds of thousands have walked the Camino each year looking for anything from spiritual guidance to a history walk. I hope that you enjoy this article and it has created an interest in the Camino for you. If it has then it is said traditionally ‘the Camino has come into your life’. Meanwhile you can read all about it and we wish you ‘Buen Camino’:

The Way of a Thousand Arrows is available on Amazon in epub and on our personal web site as a paperback or epub. See link.

We have also written A Guide to the Camino de Santiago which includes ‘ a day in the life of a pilgrim’ together with tips and guidelines for the trip. It is also available on Amazon in epub or through our web page See link: